Like most women born in the 1800s, little is known about my great-grandmother Virginia (Jennie) Williams. Women were enumerated in U.S. census records after 1840 and their names may have appeared in deeds. But it was a man’s world and records for women are lacking.

According to her obituary, she was born near Cooper Hill in Osage County, Missouri on 15 Nov 1869. However, her death certificate showed that she was born on 15 Mar 1869. The fifth of ten children, she was born to Henry Williams and Syrena Simpson Williams. The family consisted of five boys and five girls and one child who died in infancy. 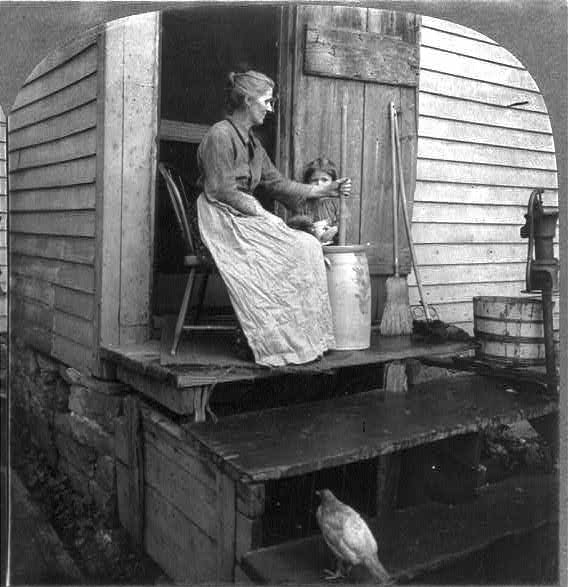 Besides caring for her children, she would have been responsible for milking the cows, churning the butter, making soap, tending to the family garden, caring for the chickens, and many of the other responsibilities that were required in running a farm.

Jennie, her mother, father, and siblings could read and write. There was probably little time to read however. Because all the children were able to read and write I assume that they went to school.

On 3 Dec 1891, Jennie married Joseph Burt at the age of twenty-two. Being one of the middle girls in her family she was well qualified to take care of her first child Elmer who was born nine months later on 5 Sep 1892. Five additional children, Edward, Everett, Curtis, and my grandmother Estella May, and Maimi were born during the next seven years. Maimi would die in infancy. Between 1901 and 1915, Otis, Irene, Amy, Ernest, Clara and Ransom were born.

Jennie died on 4 Sep 1915 of gasterectasis, a generally rare but fatal disease. Ransom, her last child was born on 16 Feb 1915. Whether or not his birth contributed to her death is unknown. Women in those days were so run-down from work and childbirth. However she was young, just forty-five years of age at her death. Twelve children in twenty-three years probably took their toll on her. And my great-grandfather Joseph was left to care for all of the children.

Years later my grandmother, Stella still mourned the loss of her mother. She was only twenty when she lost her mother. And as the oldest daughter she would bear the weight of helping to take care of the children until she married at the age of twenty-eight.

I would love to know what Jennie was like. Did she have a happy marriage? Did she love her children or was she weighed down by the sheer number of children she birthed? All but one of her children lived to adult-hood. Was this a testimony to the love and care she provided for her family? I would like to believe so. Hopefully someday I will meet a relative that can fill in the blanks for me that no historical record can. So if you are a Williams’ descendant with a picture or story to share, give me a holler’.

5 thoughts on “In Search of Virginia Williams”