“In the future, everyone will be world-famous for fifteen minutes.” [I]

Sam had his fifteen minutes of fame. He was ahead of the times. Sam was a duck, my duck. He was one of those Easter presents given to children back in the 1950s. My brother Bill was given a duck too. I’m sure the gifts were the result of Bill and me begging for the ducks. There probably was very little expectation on the part of our parents that our ducks would survive. Bill’s duck died within a short period of time, but Sam survived and thrived. The practice of giving ducks and chicks to kids is frowned upon today for good reason. 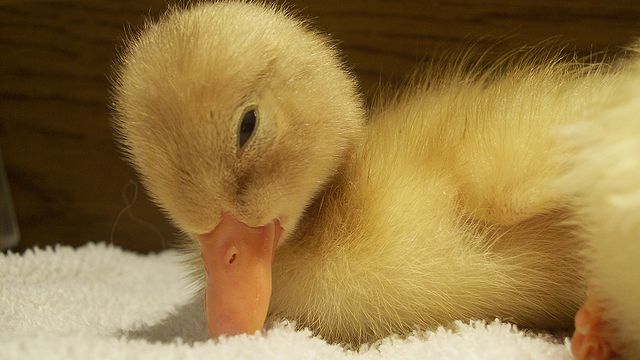 I was about twelve when Sam was given to me. Sam was a creamy, white domesticated male duck, a Pekin Duck. Full grown he was about two and a half feet tall. We kept Sam in an area between our house and the fence of our next door neighbor. Anyone who knows about ducks and chickens know that they are not the cleanest animals. Being a child of twelve I never thought of the implications of keeping a duck penned so closely to our neighbors; they were saints. And most likely my dad was the one who kept the pen clean, because I didn’t.

Toward the end of the 50s and the 60s, several St. Louis-based TV shows geared toward children were being aired; shows like Cookie and the Captain, Captain 11, and Texas Bruce. One of these programs, unfortunately I can’t remember which one, featured pets. You could send in a picture of your pet, and if they chose yours, you could take your pet onto the program. Dogs, cats, turtles, and a host of other pets were paraded across the TV set with the camera following close behind. I was so in love with Sam that, with the help of my parents, I sent off a picture to the TV station with hopes they would find Sam so alluring that they would invite me to the program to show him off. 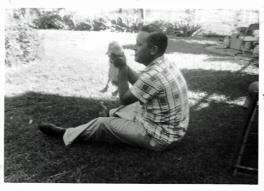 My dad, Tom Lane and Sam. Not the best picture.

I recall coming home from school one day to the news that my duck had been chosen to appear on the show. The day arrived. I was so excited. My dad prepared a box, with holes, to transport Sam to the station. I’m sure my mom did her best to make me as pretty as I could be. So off we went me, my dad, and Sam in his box. The first thing we did when we got to the station was to take Sam out of his box for the television staff to preview. Sam quacked, waddled around; he was so cute. But unfortunately he left a “present” on the floor. The immediate decision was made that Sam had to stay in his box when he and I went on air. Sam had his debut, but no one could see the full glory of this fellow viewed from above looking down on him. Where other kids could parade their pets around my pet had to stay in his box. Talk about being disappointed.

We kept Sam for about two years. He had a tendency to bite me. If you have ever been bitten by a duck you know it hurts. I don’t know if my dad got tired of cleaning out Sam’s pen or the fact that he was beginning to be aggressive, but the decision was made that Sam had to go. One Saturday morning my dad put him in the car and took him to a “farm.” I always had my suspicions that he was being taken somewhere to be someone’s dinner, but my parents assured me he would be happy in a farm setting with other ducks.

So you see, my duck had his fifteen minutes of fame long before Andy Warhol penned the phrase. He surely was a duck ahead of the times.

4 thoughts on “Sam Had His Fifteen Minutes of Fame”