The pursuit of my family history has been a wonderful journey. Not only have I found new cousins, but have reconnected with cousins I haven’t seen for many years. My cousin Carla is one of those cousins. She is the daughter of my father’s sister Helen. Carla was closer to my age than other cousins so it was natural for us to play together. Not too long ago I visited Carla. We had not seen each other for many years. I had anticipated that Carla might have pictures that I didn’t have and I had pictures to share with her. Unbeknownst to me, she had a treasure in her possession, maw’s purse. 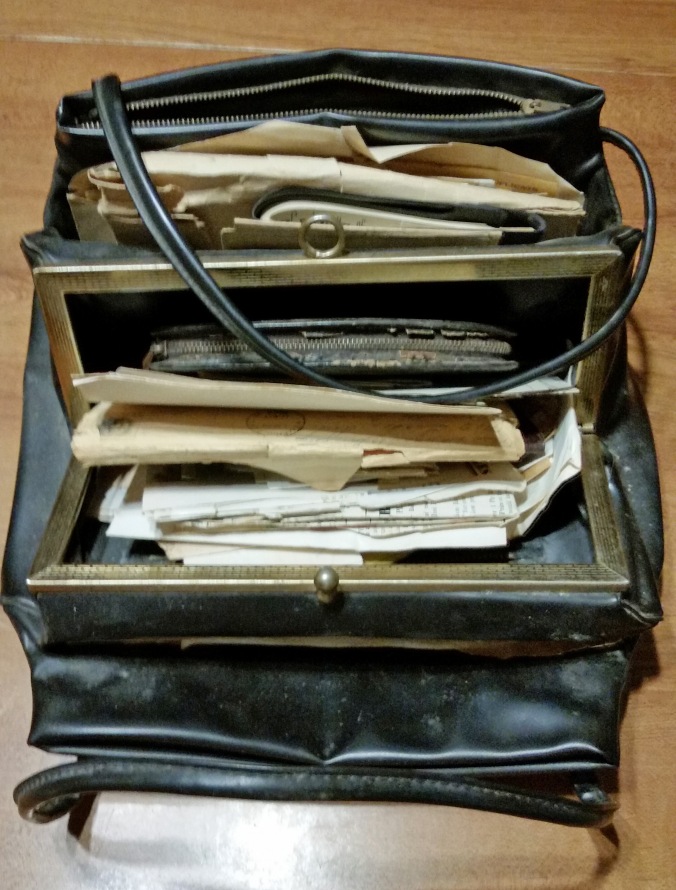 As I mentioned in an earlier post about Ruberta, my paternal grandmother, she was not a warm and fuzzy person. In fact she came across as a cold. I really didn’t know her and, in the half-dozen times we visited her, I was never to know why she was unable to show the slightest bit of warmth to me or my brother. It is only through talking to my cousins, and finding records about her, that I have come to understand her better.

Maw knew heartache. She lost her father, Aub Hood, about the age of fourteen. Not too long after that she married John Wayson, a man who was forty-one years of age. By today’s standards it’s hard to understand how her mother could allow her marry someone twenty-seven years her senior. The family was poor so perhaps marrying her off provided one less mouth to feed. The marriage didn’t last as Ruberta was back with the family in 1910.

On March 12, 1913, Maw was married to my grandfather William Everett Lane. Between 1914 and 1924 six children were born to the couple. Life was difficult. The great depression was going strong, beginning in 1924 and ending in 1939. Jobs were difficult to come by. Grandpa Lane was a carpenter and through the years the children picked cotton to supplement the family income.

The life of the family changed on June 4, 1939 when Will was instantly killed when his car was struck by a Greyhound bus. There was a settlement with the bus company that provided some relief to Maw, but I’m sure she would have given anything to have Will back with the family.

Tragedy struck again when my uncle Vernon was killed aboard a ship that was hit by a Kamikaze plane in the Pacific Ocean close to the end of the war. Maw had lost her husband and her son in the span of six years.

When Carla brought out Maw’s purse, I was amazed at the discoveries waiting for me. The purse was stuffed, and I do mean stuffed, with what appeared to be every receipt that Maw received during her lifetime. There was a receipt for a car that Grandpa Lane purchased in 1922; an Overland automobile that was already fifteen years old at the time he purchased it.

There were receipts for lumber, windows, doors, nails, and other items for use in the building of houses. There were insurance receipts, a delayed marriage certificate, grandpa’s social security card, mortgage papers; receipts that obviously meant something to Maw.

And the most poignant treasures in the purse were four letters from Vernon written to Maw while he was at sea in the Pacific Ocean. Written two weeks before he died close to the end of the war, he was responding to the fact that Maw had visited his wife Evelyn and two sons recently. In his letter he said, “Did you think the boys had growed [sic] very much? I would give anything in the world to see them but I guess it will be some time yet before I get to see them.”

He told Maw there was nothing to worry about. Was he trying to reassure himself that he would be fine as he wrote those letters to comfort her? We will never know. The saddest of all was the telegram advising Maw of his death at sea; the words so black and final upon that piece of paper.

The letters have been reunited with Vernon’s sons. My cousin Dick, who was a baby when Vernon died, told me after reading the letters he felt, for the first time, he was hearing his father’s words.

Perhaps Maw had so much loss in her life that she kept herself at arm’s length from people to insulate herself from extreme loss again. Did the receipts from her life somehow give her a feeling of closeness to the events that represented her life and the loved ones she had lost? Whatever the reasons, the contents in Maw’s purse assured me that she was a feeling woman, just not one to wear her heart upon her sleeve.