Within two years after the birth of their first daughter Mildred, the young Ferguson family moved to Sedalia, Missouri. While in Sedalia, Tom took a job with the U.S. Postal Service as a railway mail clerk. This job provided a good middle class income for the family that would see them safely through the Great Depression of the 1930s. His route went from Sedalia, Missouri to Parsons, Kansas. While in Sedalia, their second daughter Dorothy, was born May 2, 1908. Clyde followed shortly being born on May 7, 1910.

In June of 1911 the family moved to Webster Groves, Missouri. Tom was transferred to St. Louis where he worked on the St. Louis to Sedalia line. Mary Elizabeth Baker, Tom’s mother, lived with the family in Sedalia and moved to Webster Groves with them. She stayed until the early 1920s when she moved back to Fort Scott, Kansas. Russ was born December 12, 1912 and Mary was born June 13, 1915.

Railway postal clerks spent long periods of time away from home. They loaded the mail onto the car, sorted, cancelled, and filled sacks with the mail for delivery to post offices across the U. S. The postal rail car, officially known as the Railway Post Office (RPO) car, located behind the locomotive, was in a precarious position in the event of an accident. In early days they were made of wood making the cars vulnerable to fire. Because postal rail cars carried mail containing money, jewels, and other valuables, they were often the focus of robberies. I’m sure Tom carried a shotgun with him while working. Railroad postal clerks were looked upon as the elite of the postal service and Tom Ferguson was one of them. 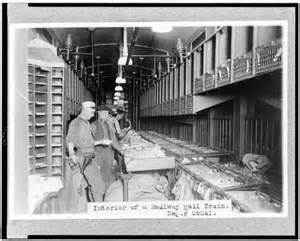 Sorting the Mail on the RPO