Ruberta, Rueberta, Bertha, Birdie, Robert A, Ruby … all names found in census records for my paternal grandmother Bertha Hood Lane. But I knew her as Maw.

Maw was born on October 14, 1894 in Mississippi to Aub Hood and Amanda (Mandy) Belle Pennington Hood. I suspect she was born in Itawamba County, Mississippi where Aub and Mandy were married. She was their fourth child. By today’s standards, Maw was very young when she married John Wayson on August 29, 1909. She was only fourteen years old. This marriage apparently did not last long because she was shown living again with the family in Lake County, Tennessee in the 1910 census. However Aub was no longer with the family and Mandy was widowed. 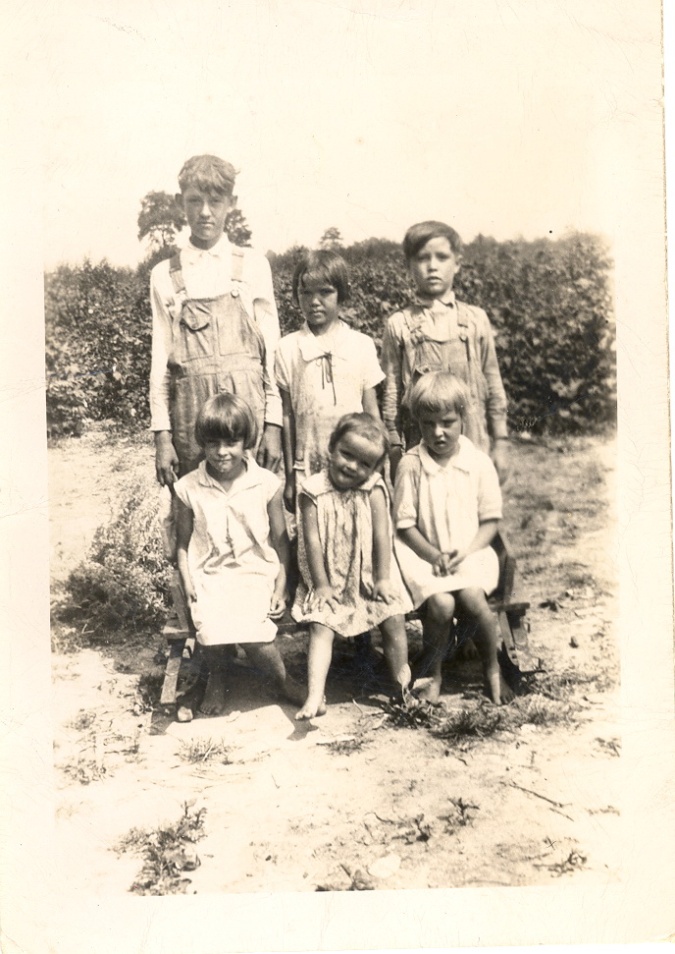 Living on a farm, particularly as tenant farmers, couldn’t have been easy in the 1920s and 1930s. Maw birthed each child at home with the help of a midwife. As the family had no electricity until the early 1930s, Maw would have cooked over a wood stove and would have washed the clothing of eight people by hand. The water for cooking and bathing probably came from a pump in the yard. Most likely she was also responsible for the henhouse and the family garden. Cotton was king in the Bootheel so the children probably were sent out to pick cotton as soon as they were able. And it is likely that Maw picked cotton some time during her life as well.

At the age of forty-four Maw’s life was to change forever. On Sunday, June 4, 1939, her husband of twenty-six years was suddenly killed in an accident with a Greyhound bus. The bus driver was found to be at fault in the accident. No doubt there was a settlement that allowed Maw to own her home and live a modest life. Six years later however tragedy was to strike her life again when her son Vernon died, the result of a kamikaze plane hitting his ship in the Pacific.

My memories of Maw are few. I can only remember visiting her perhaps a half-dozen times. She was not a warm and fuzzy grandmother. She was a large woman for her height. Maw used snuff and Sen-Sen, a breath freshener. Most likely the Sen-Sen was to cover the smell of the snuff. Her cooking was wonderful and my father bragged on her biscuits. One of my memories is walking down the dirt road that ran in front of her house to buy a chicken for our dinner from a neighbor. Much to my horror she wrung its neck when we got home. I know too well what a chicken with its head cut off looks like.

Another memory was seeing a wooden leg in someone’s bedroom. Who belonged to the wooden leg was a mystery to me for a long time. It wasn’t until recently one of my cousins said that Maw’s sister Den lived with her for awhile and Den had lost one of her legs. I believe the mystery has been solved. I don’t remember Aunt Den but I certainly remember that leg.

My cousin Donna was always in the picture. She lived with Maw while her mother Margaret and her father were away earning a living. Donna was more like a daughter to Maw than a grand-daughter. Eventually my Aunt Margaret divorced her first husband and married Walter Kulpeksa. Walter was a beautician. They set up shop in the front of my grandmother’s house. Walter gave me a perm when I was five. I looked like a poodle had settled on my head but that was the style apparently. 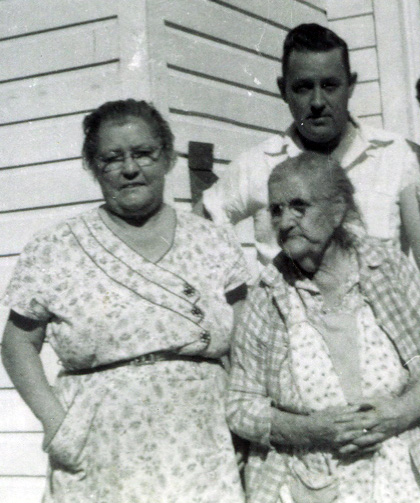 Sometime before her death, my great-grandmother Mandy (Little Granny) went to live with Maw. Little Granny was a tiny woman and very child-like. She loved ice cream. Little Granny passed away at home at the age of ninety-eight in 1961. I was fourteen when we went to her funeral. That was the last time I saw Maw.

When my oldest son was born I received an un-expected gift from Maw. It was a yellow and white crocheted baby blanket. The gift of that blanket touched me deeply. Not but a few months later we received word that Maw had died February 3, 1969 at the age of seventy-four. She was laid to rest a few days later in Maple Cemetery in Caruthersville, Missouri.

3 thoughts on “Bertha Lane…A Woman of Many Names”