It all started with Decoration Day. On May 5, 1868 Maj. Gen. John A. Logan, the head of the Grand Army of the Republic, declared May 30th as a time for the nation to decorate the graves of the Civil War dead with flowers.¹  At the first remembrance, at Arlington National Cemetery, small flags were placed upon the graves of the fallen. Over the years the day has morphed into Memorial Day, a national holiday, and has expanded to include all who died in American wars.

Today is Memorial Day and a good time to reflect on the holiday. As time goes by more and more of our World War II veterans have passed away. All of my mother’s brothers who served have been gone for several years, as have the relatives of my husband who served in the war. These families were lucky; all of their loved ones returned. Perhaps with mental scars, but at least they returned with bodies intact. 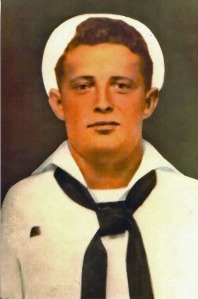 My Uncle Vernon was not so lucky. He lost his life in the Pacific Ocean. I wrote about Vernon in a previous blog. I knew Vernon had two sons, Bill and Dick. Several years ago Bill surprised me when he came to my mother’s funeral. I had never met him and I was extremely touched by his attendance. He gave me his phone number and I promised to call him. Family responsibilities and a demanding job got in the way and I never contacted him. Prior to Christmas 2015, when I was addressing Christmas cards, I came upon Bill’s phone number and decided to call him. This phone number had been sitting in my address book for fourteen years. Against all odds, Bill still had the same phone number. We met again and this time he brought his genealogist brother Dick with him. It was a great reunion talking about his father and our Lane family. At a subsequent meeting, Dick brought along the medical records from my Uncle Vernon which told the rest of the story.

Uncle Vernon was red-haired, brown-eyed, and twenty-five when he was inducted into the Navy as an apprentice seaman on April 7, 1944. He was five feet, six inches tall and weighed one hundred and forty-one pounds. He was employed as a primer assembly machine adjuster by a company in St. Louis that manufactured small arms. Within a week of induction, Vernon was sent to the U.S. National Training Station in Farragut, Idaho to receive training.

During World War II, the U.S. government didn’t mess around. By mid-July Vernon was transferred to the U.S. Naval Receiving station in Adak, Alaska and on July 22, 1944 he joined the USS Kimberly. On March 1, 1945 he was promoted from Navy Seaman to Seaman 2nd class.

Vernon was good at writing letters to his loved ones at home. Several of his letters to my grandmother, Ruberta, were found in her purse after her death (see Maw’s Purse). After reading these letters I wondered if Vernon had a feeling that he wouldn’t survive the war because he always reassured my grandmother that he would be alright. Or perhaps, because my grandmother had lost her husband William Everett Lane in 1939, her anxiety came through in her letters to Vernon and he was trying to help ease her fears.

During the last week of March 1945, the U.S.S. Kimberly was taking part of “Operation Iceberg.” The purpose was to take Kerama Retto, an island about twenty miles from Okinawa. The U.S. Navy wanted to establish a naval seaplane base and sheltered anchorage prior to the invasion of Okinawa. On March 26th, the U.S.S. Kimberly was proceeding to her picket station off Kerama Retto.² 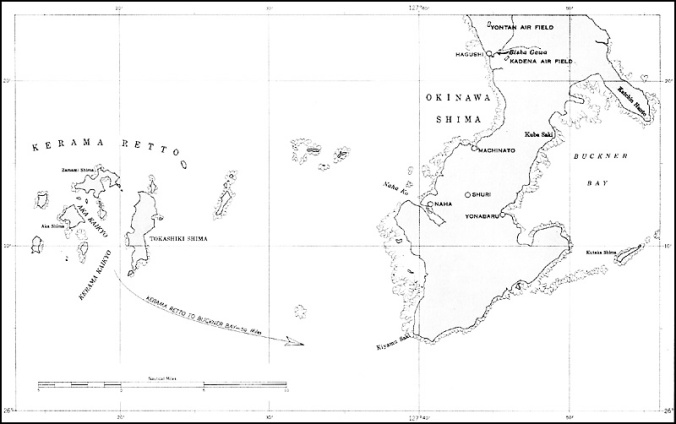 The navy had surprised the Japanese but they were able to send out two Japanese D3A airplanes used as carrier-based bombers and dive-bombers, in other words Kamikaze. The Kimberly’s lookouts saw the planes and opened fire turning the planes away. The planes veered off but then headed toward the USS Kimberly again.³ You can imagine the noise and the sound as the guns blasted away at the approaching planes. Eventually one of the planes went out of control and fell vertically on the ship. From accounts of the intensity of the explosion, it was indicated that there was a bomb onboard the plane.

Call it bad luck, or just doing his job, Vernon was in the area of the explosion. From the medical records we know that he received burns to his face, neck, arms, chest, and legs suffering 2nd and 3rd degree burns over 75% of his body. Within four hours he was transferred to the USS Rixey, a casualty evacuation transport ship. His care was crude compared to the care burn victims receive today, but the best he could receive at the time. He must have been in terrible pain and hopefully the morphine he was given helped to alleviate that pain. For four days he was in shock, was restless and irrational, and had an increasing temperature. Despite the effort of the naval doctors, Vernon lost his battle at 8:38 am on March 30th. He was buried at sea at latitude 26° 14’ North, Longitude 127° 11’ East at 4:30 that afternoon. A headstone at Jefferson Barracks in St. Louis County commemorates his death. Records indicate fifty-seven men were seriously wounded, four died from that attack, and Vernon was one of them. 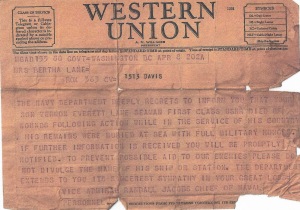 A sad day when this telegram arrived.

A letter from the ship Chaplain, Lindley E. Cook, was sent to Vernon’s wife Evelyn the day he died. The chaplain reported he didn’t suffer too much because he was unconscious most of the time. He kept repeating her name. Who knows how long it took for Evelyn to receive the word. My grandma learned of Vernon’s death via a telegram advising her Vernon had died and was buried at sea with full military honors. Evelyn later received a letter from the Secretary of Navy authorizing the Purple Heart to be posthumously awarded to Vernon.

On 3 May, 1945, an article in The Sikeston (Mo.) Herald listed Vernon as one of the fourteen men from the southeast Missouri area that were killed in combat. I can’t imagine the heart-break again that Evelyn and my grandmother must have gone through if they saw the name of their loved one in the newspaper. Somehow that would make it all too final.

According to Wikipedia over 291,000 U.S. soldiers were killed in combat during World War II. Bill and Dick’s dad, and my Uncle, was one of those 291,000 people. So while you enjoy your time-off, please remember those who gave their lives to free the world of tyranny so many years ago. ⁴