Imagine being four years old and traveling steerage on a ship from Switzerland via Southhampton, England, to New York City. The trip would have taken about six or seven weeks, a long time for someone so young. Julius Schwegler came with his father Joseph, his brother Francis Anton who was one year old, his step-mother Anna Schwegler, Peter Schwegler, and Catherine Graninger. They arrived on 20 Jul 1863. Julius Schwegler was my great-grandfather.

Julius was born in Switzerland on 31 Jan 1859. Anna was not the mother of Julius. His mother had died and Joseph married Anna prior to their journey. Anna however was the mother of Francis.

Upon arrival to this country the immigrants went directly from New York to Centralia, Illinois. How they got there is anyone’s guess. It is possible that they took a train from New York to Chicago and from there traveled to Centralia via wagon. However they traveled it must have been long and arduous after having spent several weeks on a ship. 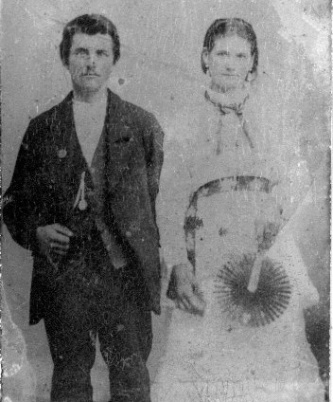 While in the Centralia area Anna gave birth to Joseph. Every indication is that she died sometime after his birth. By 1865 the motherless family was in Gasconade County, Missouri. On 22 Mar 1867, his father Joseph married Anna Fehner Kallewyne. Julius was eight years of age, Francis (also known as Frank) was five, and Joseph was almost three. Another brother Hann was born in 1867 and most likely died shortly after his birth. Benjamin, the last son of Joseph, was born in 1868.

A few years later, in 1870, Joseph died. It must have been very difficult for Julius to lose so many important members of his family by the age of eleven. Despite all of the upheaval in his life, Julius managed to attend school through the eighth grade.

Whether he got along his step-parents or not, Julius was no longer living with the family in 1880. He is shown in the census living with N. B. Jones and wife in Jefferson Township, Maries County, Missouri. He was twenty-one years of age. He would stay in Maries County for the rest of his life.

Julius married Sarah Frances Ridenhour on 28 Nov 1880. This union lasted forty-four years and produced six children: Oliver, Harley, Benjamin, Harrison (my grandfather), Ida, and Rainey. Oliver and Ida died at an early age. The beautiful picture of them, most likely as newly-weds, shows them in their youth looking forward to a promising life together.

Following in the footsteps of his father, it must have been a proud day when Julius was admitted a citizen of the United States on 5 Nov 1881. Transcribed his naturalization record reads:

Julius was a farmer in Maries County most of his life. And Sarah took care of the needs of the family. I don’t know much about my great-grandmother. She died of chronic nephritis with valvular heart disease as a secondary factor on 17 Aug 1924. Julius would go on to live another nineteen years.

In 1940 Julius was living with his son Benjamin. During the last months of his life Julius lived with his son Harley and daughter-in-law Leona. He died on 21 Feb. 1943 at the age of eighty-four. A very religious man, he is buried in the Bethel Cemetery in Paydown, Missouri.

Thanks to my second cousin William Schwegler who provided me with many of the personal details about the life of our great-grandfather Julius including the fact that Anna was not his mother. Most of the details he told the family, despite the fact that he was somewhat senile, could be verified in records.