Thomas Morgan Parry was a first-generation American born to Welsh parents in Palmyra, Portage County, Ohio. In the late 1800s, a large portion of the population of Palmyra was Welsh. Tom, born on 3 January 1876, was the middle child and only boy of Evan Parry and Margaret (Morgan) Parry. Jane was born in 1874, Tom in 1876, and Mary in 1877. Thomas is Dave’s grandfather.

In 1880, Evan and Margaret lived in Youngstown, Mahoning County, Ohio where they would remain for the rest of their lives. The Welsh were drawn to this area of Ohio starting in 1854 with the opening of coal mines and the erection of iron works. The Parry family arrived in the area in 1856.¹ And it was in the steel mills of Youngstown that Tom Parry would learn his trade as a roll turner.

Tom lived at home with his parents until the age of twenty-four when he married Sarah Elizabeth Mitchell on 18 July 1900. Tom and Sarah were married in a quiet wedding in the home of her parents. Only close family were in attendance as her father Richard had died the previous week. Following the wedding, Tom took his bride on a “trip up the lakes” accompanied by her brother Albert Mitchell.

The Parry’s moved frequently changing residences every year or two. Their first child Margaret was born in November of 1903 in Detroit, Michigan where Tom was employed as a rod turner. Back to Youngstown they went in 1904 and continued their ways of moving frequently.

In 1908, they lived in Eldes, Oklahoma where Tom ran a trading post on an Indian Reservation. Dave recalls stories of him paying Native Americans with vanilla extract for work they performed in the post. This practice was illegal as vanilla extract is about 35% alcohol. At times, when the workers perspired heavily, the smell of vanilla permeated the post.

As World War I dragged on the U.S. government conducted the third draft registration in September of 1918 for men between the ages of eighteen and forty-five. Draft registration cards are a treasure of information. Tom’s card revealed that he was forty-two, worked for Brier Hill Steel Company, and lived in Girard, Trumbull County. He was tall, slender, had blue eyes, and gray hair. Two months later the war ended. Fortunately, Tom did not have to serve in that horrendous war.

From the beginning of their marriage, Tom and Sarah rented and moved every year or two. This had to be difficult for the family. However, it was in Trumbull County that the Parry’s finally purchased a home and appeared to settle down, at least for several years.

Large steel manufacturing operations existed in the areas of St. Louis, Chicago, and Baltimore. Perhaps looking for a better job, Tom moved the family to St. Louis in the late 1920s where he took a job as foreman at Missouri Rolling Mills. Tom was a skilled craftsman, a roll turner. Here is a description of his occupation, “Working from blueprints, roll turners clamp steel blocks in giant lathes and cut the desired grooves into the steel blocks, using cutting tools. Roll turners constantly check the shape and size of the grooves on the roll against a template (pattern). In this way the rolls, to be used in rolling mills to shape other steel blocks, are manufactured.”²

In the late 1920s, the Parry family moved to St. Louis. By 1930, Margaret had gotten married and was no longer residing with the family. Howard was twenty-one and an apprentice pattern maker for a car foundry, Betty was working for Frisco Railroad, and Jane was in high school. And Tom had abandoned the family.

Sometime during the next several years Tom and Sarah divorced and Tom married a woman named Ethylyn (Thomas) Schroeder. Howard, Betty, and Jane supported and took care of their ailing mother until Sarah died of cancer in 1937.

Tom and Ethylyn remained in St. Louis until 1945 when they moved to San Bernardino, California. Tom’s last employer was Kaizer Steel Company where he continued to work as a steel turner until he retired. Eventually, Howard moved to California with his wife Ada.

Dave recalls his grandfather as a stern man during the few times when Tom came back to St. Louis for a visit. Through the years I never, ever heard my sweet mother-in-law say anything bad about anyone. And she didn’t say much about him but you knew from the tone of her voice and her demeanor that when she talked about him that she had a deep resentment toward him over how he had treated her mother.

Tom died on 26 July 1960, at the age of eighty-four, at Pleasant View Sanitarium located in Monrovia, Los Angeles County. He was suffering from a variety of ailments including ALS and cancer of the prostate. But it was congestive heart failure that did him in. He was buried at Green Acres Memorial Chapel in San Bernardino County, California. 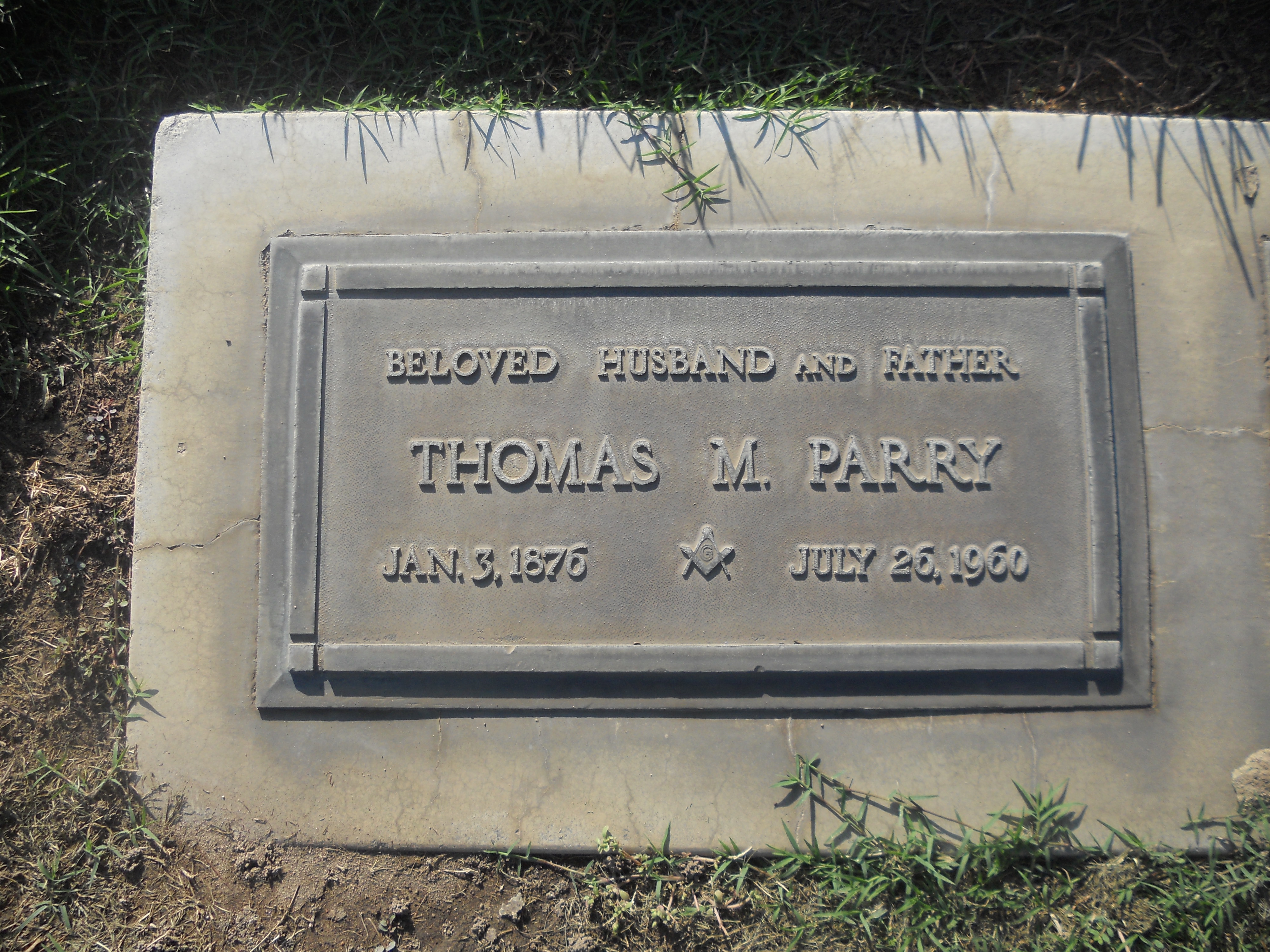