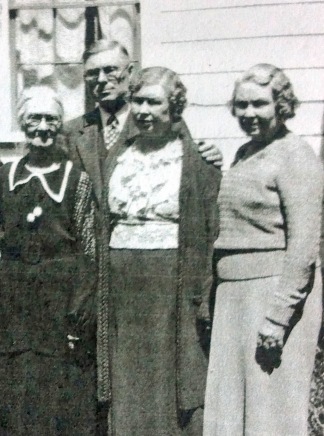 There were three orphans…so goes the Ferguson family lore. The Fergusons came from North Carolina. The story between North Carolina and Missouri was lost. When family members became interested in the genealogy of the family, Grandma Ferguson, Lola, was in her eighties. She knew that Thomas Bunn Ferguson was one of the three orphaned children and their parents had come from North Carolina. Thomas Bunn was the father of her husband, Thomas Carrol Ferguson. It was assumed that the family lived in Fort Scott, Kansas but that led to a dead end.

Fast forward to today and we know that Thomas Bunn Ferguson was born on 28 February 1844 in Cass County, Missouri to Russel Ferguson and Sarah [Miller] Ferguson. Thomas was one of four children. Jackson (Jack) was born in 1842, Martha was born in 1847, and James C. was born in 1851. The family lived in Cass County, close to other Ferguson relatives who lived in Johnson County. The Ferguson clan had migrated from Tennessee to that area as early as 1821.

James and Martha were still living with their aunts and uncles when the 1860 census was taken, but Thomas was nowhere to be found. Then, in 1870, he is found living in Richland Township, Vernon County, Missouri with the Shackelford family. Rebecca was the widow of Augustus Baker and had married Samuel Shackelford after Augustus was killed by Bushwackers in 1863. Rebecca was the mother of Mary Elizabeth (Mollie) Baker.  Thomas was working as a farm hand for the Shackelfords. In the fall of that year, Mollie became the wife of Thomas on 23 October 1870. He was twenty-six and she was sixteen.

When Rebecca’s daughters married she deeded to them a part of the land homesteaded by their father, Augustus Baker. Thomas and Mollie lived in a log house on her portion of the land. This is in section thirty-one in Richland Township in Missouri. The land abutted the border between Missouri and Kansas. Mollie owned this land well into the 1900s. Many in Vernon County knew this land as the “Old Ferguson Farm.” According to Grandma Ferguson, it is on this land where the family lived the entire time the children were growing up.

However, the Ferguson’s also owned one-hundred and sixty acres in section fourteen located in Scott Township, Bourbon County, Kansas across the state line. Records show that the Fergusons sold a portion of their land in Missouri to J. H. Densmore on 28 March 1874. According to census record of 1875 and thereafter, the family lived in Scott Township in Kansas.

Within ten years, three lively children were born. Their first child, Rebecca Adeline was born in 1872. Walter Augustus followed in 1875, and Sophia in 1877. At the time of the 1880 census, taken on 3 June 1880, Thomas was listed as having the mumps. Hopefully he was over the mumps as a little more than one month later Thomas Carrol was born. The final child, Samuel Bunn, was born in 1883.

The family has often wondered where the middle name Bunn came from. There were no Bunn’s enumerated in any of the census records for Vernon County in Missouri or Bourbon County in Kansas. There was, however, a Bunn family who lived close to the Ferguson family in Cass County where Thomas’ mother and father lived. Perhaps this Bunn family was somehow related to Sarah’s Miller family. Perhaps more research can help to identify the connection between the Bunn’s and Ferguson’s. 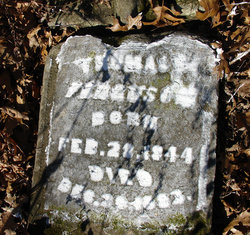 Grave Marker for Thomas B. Ferguson

Thomas Bunn Ferguson died on 30 December 1883 at the age of thirty-nine. Mollie was left a widow with a nine-month old baby and four children ranging in ages from three to eleven years old. My husband’s grandfather, Thomas Carrol, was three at the time. It’s safe to say that he remembered very little of his father. While the children weren’t orphans, they did lose their father at a young age like their father Thomas did.

Mollie continued to live on the farm in Kansas with her growing children. It is here that Thomas Carroll Ferguson and Lola Pope grew up in close proximity of each other which would eventually lead to their marriage. Thomas Bunn Ferguson is buried in the Coleman Cemetery in Richards, Vernon County next to his grandson Glenny, son of Thomas Carrol.

One thought on “Thomas Bunn Ferguson…Orphan”