John Ridenhour was born 31 October 1802 in the Upper Louisiana territory. The land, which was part of a Spanish land grant, was under control of the French who sold the land as part of the Louisiana Purchase to the United States government on 30 April 1803. The land where he was born lay on Ridenhour Creek near Boles, Franklin County, Missouri.

John was the last of seven children born to John Ridenhour and Christina (Zumwalt) Ridenhour. They lived on land that was wild, uncultivated, and teeming with animals. This was also the land of the Osage Indians, the Indians that killed his father on 3 April 1803. His mother had to petition the U.S. government to honor the land grant that her husband John had purchased from the Spanish.

John married Elizabeth Reed about 1824. She was born 30 November 1800 near Lexington, Fayette County, Kentucky to Edward Reed and Margaret (Close) Reed. The Reed’s moved to Missouri around 1810. During the next six years their three children, Reuben, Martin (our ancestor), and Amelia were born. 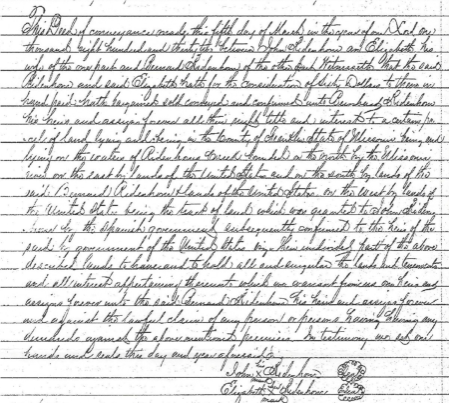 John Sold his Portion of Inherited Land to his Brother Bernard

On 5, March 1832, John sold his share of the land inherited from his mother to his brother Bernard. The land had the Missouri River as a boundary to the north, on the east and west were lands of the United States and the land to the south was owned by his brother Reuben. This was the land granted to his father by the Spanish government. He then moved the family to Gasconade County where they were enumerated in the 1840 Census. Living with them were their children Reuben, Martin, Amelia, Elizabeth, and Elvira. Adam, their son, was born after the 1840 Census was taken. Thomas Benton was born in 1842 and their last child, Christina, was born in 1846.

By 1850, the oldest of John and Elizabeth’s children were out of the home leaving Elvira, Adam, Thomas, and Margaret. Amelia, their daughter, most likely died before 1850. Living next to them was their son Reuben and daughter Elizabeth and her husband Samuel Hawkins.

At the time of his death, John owned two hundred acres of land. He sold the land purchased from John Hutten to his son Martin in February 1852 indicating that he was possibly ill and unable to use the land. John died six months later on 4 August 1852. He is buried in Backues Cemetery in Maries County, Missouri.

John died without a will. His son-in-law, Samuel Hawkins, was appointed the administrator of his estate. After his death, Reuben, Martin, and Alvira quit-claimed their undivided portion of land inherited from their father’s estate to Samuel. Reuben sold his land first for fifty dollars in 1853 followed by Martin and Alvira who received one hundred dollars each.

A year before the Civil War, Elizabeth was living with her daughter Margaret, aged fourteen. Margaret was listed as a farmer in the 1860 census. Three of her sons, Martin, Adam, and Thomas enlisted in the 34th Regiment of the Enrolled Missouri Militia. After their discharge in 1864, they enrolled in the 50th Regiment Infantry. Their discharge took place after a month of service on 27 April 1865, after the Civil War was over. The Civil War era must have been very stressful for Elizabeth, a widow, having to support a young daughter, and having three sons serving in the Missouri Militia. 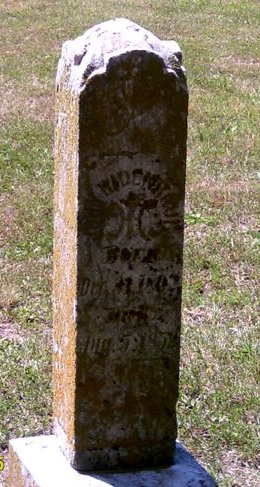 Elizabeth was not found in the 1870 Census so little is known of her life between 1860 and 1870. She died 2 June 1872 in Belle. She is buried in Backues Cemetery in Maries County with her husband John.