A Poor Picture of Minnie Mae in Later Years

Childhood memories float in our minds like ethereal pictures of bits and pieces of our experiences…bits and pieces that may or may not accurately reflect the true happenings of the moment. Such is my memory or lack of memory of my great-grandmother Minnie Mae Perry.

Minnie Mae Perry was the mother of my grandfather, William (Will) Everett Lane. Her parents, Joseph Calvin Perry and Irene Reville/Revels were from Martin County, North Carolina. They migrated to Crockett County, Tennessee sometime around 1868. Minnie Mae, the fourteenth and last child of Joseph and Irene was born on 26 February 1875 in Maury City, Crockett County.

Joseph only had two sons. All the remaining children were girls. In 1880, Joseph was farming the land with the help of his girls who ranged in age from nine to twenty. Minnie Mae, at the age of five, was too young to help. Unfortunately the 1890 census records were lost in a fire so we have no record of Minnie during that time-frame. Most likely she followed in the footsteps of her sisters in helping on the family farm until she married or until Joseph died sometime before 1890.

Minnie Mae and my great-grandfather, Edgar Lane married in Crockett County on 20 July 1894. Minnie was nineteen, and a cradle robber, as Edgar was only fifteen. On 13 June 1895, my grandfather, Will was born.

It could not have been a happy marriage. Edgar was known to be a gambler and it’s calculated that sometime around 1898 he disappeared. He may have walked away from gambling debts and family responsibilities too heavy for his young age of nineteen. It was possible back then to disappear and start a new life somewhere else. Or, as some family members believe, he came to a premature end due to his unsavory life style. However the cause, he was gone from Minnie and Will’s lives forever.

In those days, family helped to pick up the pieces of a shattered life. Fortunately Minnie’s mother Irene lived across the river in Gayoso Township located in Pemiscot County, Missouri. She was living with her son John, her widowed daughter Mary Mullins and Mary’s son Lloyd. Most likely Minnie and Will moved in with her extended family after Edgar’s disappearance as they are shown living with the family in the 1900 census. Minnie helped John with the farming and Mary helped with the domestic work. 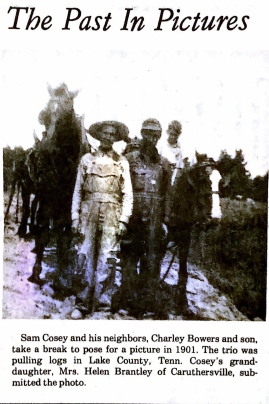 The next year Minnie married Samuel Cosey on 3 August 1901 in Lake County, Tennessee. Sometime before or after their marriage, Sam and his neighbor, Charley Bowers, took a break from pulling logs to have their picture taken. The picture was subsequently published years later in an unknown newspaper and, fortunately, the clipping was saved by the Lane family.

Minnie and Sam added to their family when their daughter Gladys was born in 1902 and son Raymond was born in 1907. The entire family was living in Gayoso in 1910 including Minnie’s mother Irene and brother, John. John had changed his profession from farming to carpentry. Perhaps this is where my grandfather Will, fourteen at the time, learned his profession.

Through the 1920s and 1930s the Cosey’s lived in Little Prairie, Pemiscot County. In 1939 Minnie lost Will to a bus accident with a Grey Hound bus in Caruthersville. The accident was on one of the major thoroughfares of this small town. Perhaps the reminder of the loss of her son each time she passed by this place was too much to bear for in 1940 she and Sam moved to Rombauer located in Butler County, Missouri.

When I was about five or six I recall visiting “some people” who had mules. I believed that they lived in either Tennessee or Arkansas. I recall a rustic fence with mules inside. There were several older people standing around with my mother, father, brother, and me. My father, laughing, climbed over the fence and jumped on the back of one of the mules. He was immediately bucked off. When he got up, he was still laughing, a little sheepishly though, and climbed back over the fence. This picture of my dad being bucked off the mule is as clear today as it was back then. 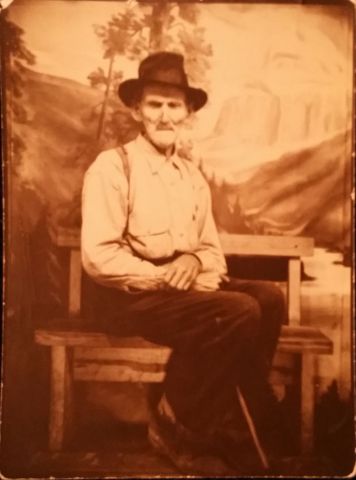 The reality of this memory is we visited my great-grandma Minnie and step-grandpa Sam. I didn’t even know Minnie existed until I started my genealogy quest a few years back. We were in Rombauer, Missouri not Arkansas or Tennessee. And Sam was known for his mules. I imagine he got a kick out of my dad trying his hand at riding one of his prize mules.

Sam Cosey died at the age of seventy-five in November of 1954.This was probably a year or so after our visit.  Just a little more than four months after Sam was buried, their son Raymond died of peritonitis of the gallbladder. This was a sad time for Minnie. Minnie lived another nine years joining Sam on 13 December 1963. Both are buried in Maple Cemetery in Caruthersville.

Through interviews with cousins I was able to put the people and places together to form the accurate accounting of this wonderful memory.  Like all of us, I have a lots of bits and pieces of memories floating around in this old brain of mine. However, this was a reminder to me that I have to check, and re-check those bits and pieces to make sure I relate them as they really were.

Edgar Lane died about 1898 leaving a widow and orphan. Since women did not have a means of support when their husbands died they were often left at the mercy of family for help. There probably was no question that Minnie’s family would take her in. The 1900 US census shows her living with her brother John Perry, mother Irena, younger sister Mary, also a widow, and Loyd, Mary’s son. The family lived in Gayoso Township in Pemiscot County, Missouri.

Until Grandpa Lane ventured out on his own he lived with his mother and extended family. In 1901 Minnie Mae married Sam Cosey. By 1910 Sam and Minnie added two children to their family, Gladys and Raymond. And Uncle John and Grandma Irena still lived with the family. Down the street lived their Uncle Robert Whitaker and his wife Laura Perry Whitaker. This blending of families was normal for my family and families throughout the United States.

Grandpa was a handsome boy. I recently discovered my cousin Carolyn has a picture of him hanging in a room in her home in Caruthersville. Grandpa is surrounded by a room full of dolls. I wonder what he would say. The picture, more than a hundred years old, is slightly tattered but in a beautiful frame. As an adult he was tall, of medium build, had brown eyes, and dark brown hair. During World War I men had to register for the draft. Fortunate for us genealogists these forms tell us a lot about our ancestors including their physical attributes. 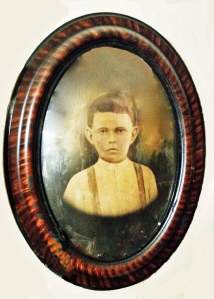 I don’t know much about Grandpa, only what I have gleaned from census records and what my half-sisters and cousins have told me. In fact when I inherited pictures from my parents there was a picture of a man with no name written on the back. I had never seen the picture before and it turned out to be Grandpa Lane.

School was a luxury for poor families. Grandpa didn’t attend school but he could read and write. He worked in a box factory as a laborer when he was twenty-four. By the time he was thirty-four he was a farmer on rented property. I understand he was a good father. He was also a carpenter; he helped to build the grandstand at the Caruthersville fairground. His Uncle John Perry was also carpenter. Perhaps this occupation was inherent to this family.

Grandpa Lane’s life abruptly came to an end on Sunday, June 4, 1939, around noon, when the car he was driving collided with a Greyhound bus just north of Caruthersville at the intersection of Highway 84 and Ferry Road. Much of what I know about the accident came from articles that appeared in The Republican and Democrat Argus, both newspapers in Caruthersville at the time. 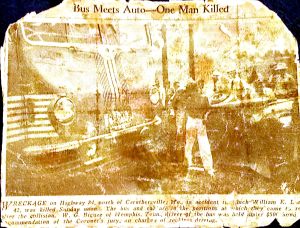 Picture of Collision that took Will Lane’s Life

According to witnesses at the scene of the wreck, Grandpa drove onto the highway in the path of the bus apparently unaware of the approaching bus until too late. Joe Wagner, a witness and owner of the filling station who witnessed the accident, said that he was told Grandpa had driven from town to test out a leaky tire and circled around his filling station onto Ferry Road to come back into the highway. It was then the accident happened. I find it interesting the bus driver was charged with reckless driving when it appears to me, in hindsight, that the accident was caused by my grandfather. Funeral services were held the next day at H. S. Funeral Home. He is buried in Maple Cemetery in Caruthersville.

My dad Talmadge was twenty-four when his father died. His siblings ranged in age from fourteen to twenty-two. Despite the fact that these children were older at the time of their father’s death, I’m sure they were left with a great hole in their heart. I know my dad was.